Unfortunately, many of the exact places where victims were executed and buried remain unknown. Open searches for information about them in the administrative archives of the FSB and Interior Ministry is forbidden. It is known for certain that no less than 29,900 people were executed in Moscow during the Great Terror. According to the latest data gathered by International Memorial, the total number of people who were executed for political reasons during the Soviet era was at least 40,000-42,000 people. This estimate does not include prisoners who died in camps, prisons, or prison hospitals in Moscow, nor does it account for Muscovites who never returned from the Gulag.

Executions during the Civil War occurred in various parts of Moscow, such as prison basements, monasteries converted into concentration camps, courtyards, parks, and city cemeteries. Remains found in the 1990s during restoration work on Moscow’s monasteries confirm the evidence presented in memoirs that executions were carried out in the Novospasskiy, Ivanovskiy and Andronevskiy concentration camps. According to the memoirs of the Kremlin commandant Pavel Malkov, in those years executions took place in the basement of the Grand Kremlin Palace as well. There is also substantial evidence that in 1918 mass executions were carried out under the walls of the Bratskoye Cemetery.

In the beginning of the 1920s, the implementation of death sentences and burials of executed victims was systematic. Arrests and executions were conducted secretly and almost always during the night. This practice persisted for decades. Even though a number of execution and detention sites have been documented, we believe that many places still remain unknown. 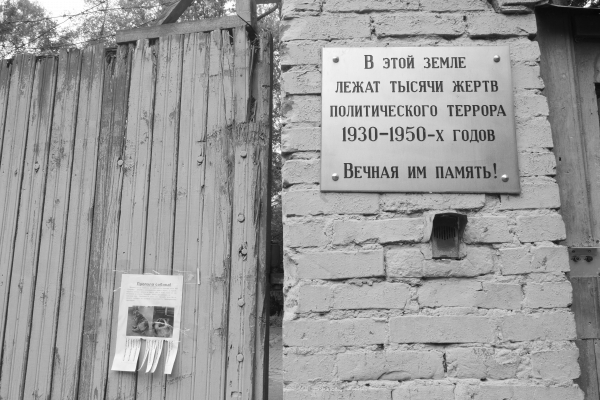 The vast majority of those who were executed for political reasons during the Soviet era were not sentenced by common or military courts, but by the secret police known as the VCheka, or Cheka. They conducted special hearings and handed down sentences from the smallest punishments to the most severe sentences, ranging from imprisonment to terms in concentration camps and executions.

The committee of the OGPU (Unified State Political Administration), which was founded in 1923 as the successor to the VCheka-GPU, possessed ultimate judicial authority. From 1924 onward, the members of the OCO (Special Council of the NKVD) also had judicial rights, but only the OGPU had the authority to order death sentences. Neither the accused nor the witnesses were called to hearings, and the counsel for the defense was not allowed to participate either. A typical hearing consisted of a formal presentation of the case according to a protocol prepared beforehand and a brief discussion followed by the signing of documents. Within only a few hours, the court would often hear 30-50 cases, sometimes even more. These hearings did not involve the entire committee, but only a specially chosen group, usually consisting of no more than three people. The vice chairman of the OGPU, Genrikh Yagoda, was the leader of the hearings from 1926-1934.

In the 1920s and at the beginning of the 1930s, the OGPU committee was the central organ that ordered death sentences on political grounds. For example, in 1926, the committee sentenced 517 people to death; in 1927 – 779; in 1928 – 440; in 1929 – 1383; and in 1930 – 1229. During this period, tribunals and courts also dealt with political cases, but they ordered death sentences far less frequently. The cases that were more relevant to the OGPU were selected and sent directly to the committee. In the committee and the OCO, the risk that cases could be returned for further investigation, or that verdicts would be overruled, was significantly lower than in ordinary tribunals and courts.

With the foundation of the NKVD (People's Commissariat for Internal Affairs), the committee was abolished. The Special Counsel (OCO) was retained within the NKVD and it continued to exist until autumn 1953. It maintained the authority to order death sentences only until the Second World War. During this period, the NKVD sentenced more than 10,000 people to death.

The local organs of the OGPU did not possess judicial rights. The NKVD troikas, which were established in 1924 by OGPU representatives, were an exception. The troikas' task was to hear only banditry cases, but they could order a range of sentences, even executions.

A troika's sentences were confirmed by the OGPU in Moscow. The troikas' decision-making procedure was even more simplified than that of the committee, and they maintained the principle of preventing the accused, witnesses, and defense from participating. Each year from 1926-1929, some three to six such troikas were active (in Siberia, the North Caucasus, the South Caucasus, and other regions). During these four years, they sentenced more than 3,000 people to death.

In February 1930, troikas were established in all local branches (polpredstvo) of the OGPU in order to suppress the resistance against mass collectivization. Troikas obtained the authority to hear not only banditry cases, but also a wide variety of accusations against “counter-revolutionary crimes.” As a result, in 1930, the local troikas of the OGPU condemned 18,966 people (!) to death; in 1931 – 9,170. In 1932-1934 the authority of the troikas was radically limited. Abolished troikas were transferred in July 1934 from the OGPU to the NKVD. The troikas of the OGPU’s local branches were active in 1934-1935 and they were the direct predecessors of the infamous UNKVD, which operated from August 1937 to November 1938. During this period the UNKVD sentenced around 400,000 people to death.

In the 1920s, there were no OGPU troikas in Moscow, but the central apparatus of the OGPU was responsible for the cases in Moscow and the surrounding region. In 1929, the Moscow region was created. It included the Moscow, Tver, Kaluga, Ryazan, and Tula provinces. Shortly thereafter in February 1930, a local branch of the OGPU was founded in Moscow as well. A troika was set up immediately alongside the local branch. Its first meeting was held on March 7, 1930 and the last one on July 10, 1934, the day before the abolition of the OGPU. Thus, during the years 1930-1934 there were two effective OGPU organs in Moscow: the OGPU committee and the local troika of the Moscow oblast'.